Due to overwhelming demand, we are undergoing a few changes in sample processing. Our customers will be receiving an email notification once the samples reach our lab in Japan, which will be around 2 weeks after the sample is mailed to us.

What can you learn from your DNA? Photo by mentatdgt from Pexels

Your genes are the footprint of who you are. Humans are known to have approximately 26,000 genes. Each gene is made up of a special protein material called DNA, which translates genetic information necessary to sustain function and life. We inherit the DNA codes, or sequence, from both our parents, thus, this is why we resemble them.

WHAT IS GENETIC TESTING?

Each gene is made up of a nucleic acid called DNA, which translates genetic information necessary to sustain function and life. There are 4 nucleobases that make up the nucleic acid of DNA: adenine (A); Thymine (T); Guanine (G); and Cytosine(C).

These four bases are like letters. For example, when combining the four letters "L" "O" "V" "E", the four bases become genes with various genetic information depending on their arrangement so that it becomes the word "LOVE". However, when "O" of "LOVE" changes to "I", there may be a difference in base sequence so that it becomes "LIVE". This difference is called "polymorphism", which leads to individual differences in constitution. Genetic testing aims to investigate this slight difference and to statistically analyze the constitution and the possibility of disease by comparing it with research data accumulated so far in the world. This is what GeneLife DNA reports are based on.

WHAT CAN WE DO WITH THE INFORMATION WITHIN OUR DNA?

Genetic researchers have started to identify which genes affect the onset of lifestyle diseases. Thus, a DNA test will allow you to understand which diseases you are at genetic risk of developing in the future. 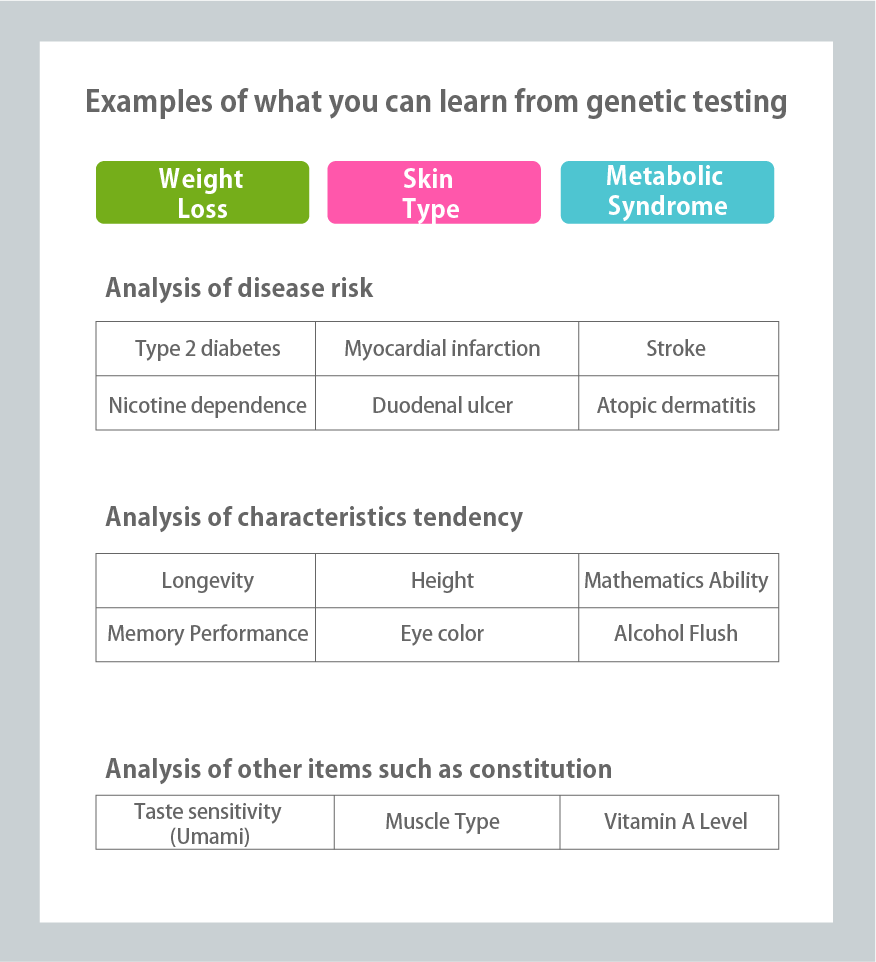 Of the genes that are already mapped, it is known that each individual has a 0.1% difference in the sequence. Since genes do not change during one’s lifetime, you need to only test once. You can make better lifestyle choices based on your risk profile.

Learn more about yourself with help from your DNA with GeneLife's at-home DNA test kits.